We went to the mountains…

We went to the fields….

And afterwards we had to eat…

Anne Knight, Peter Fenner, Paul Wheatcroft and Alex McAtamney hijacked the Lasham expedition to Jaca this year.  We flew the Lasham Duodiscus and K21(775) and we were joined by Lasham instructors John Brooke and Bob Johnson to keep us safe in the mountains.  Great fun was had by all!
Monday
The week started well with flights to stage 3 for Anne & Peter in the Duo-Discus, although Alex’s first flight in 775 was shortish & rather spoilt Paul’s day, as Alex describes below…

The conditions were beautiful. Perfect for flying. Myself and John Brooke instead enjoyed the day with sheep 6km east of the airfield. Total flight time 11 mins. I soon learned that pulling off aerotow with 10kts on the vario doesn’t count for much if it’s not there after turning to reconnect. We had to rapidly consider plan B as the vario sang out 6knts of sink. Oh. What plan B. Within moments I was looking up at the ridge line wondering how we were going to hop over to reach the airfield. As one does in situations like this, you have control John. He weaved  down the ridge very close to the bowls trying to find the slightest of lift.  The vario kept singing 6kts down. I was looking at fields out in the valley rising up the canopy. John spotted a field down to our left deep in the river gorge. Our remaining altitude was disappearing rapidly. We hopped over the last tip of the ridge and around to the front face, still sinking. Power cables straight to the left. No height to get over. Field straight ahead sloping upwards. 100 ft remaining. airbrakes open. Hello sheep. Luckily they kept themselves to the lower half of the field under the power cables  What a great day. I probably learnt more in that 11 mins  than I would have cruising the beautiful peaks for 3 hours. 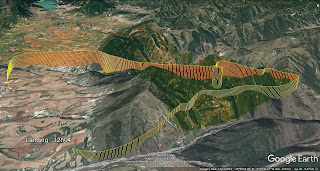 Tuesday was a challenging day which started late and ended early, but we all flew. And Bog Johnson provided an evening cultural tour of Jaca town which included the walk past the gay knight (don’t ask) and a visit to Tasca de Ana – tapas to die for and, if you get there early, a table to sit at.

Wednesday
There was cloud over the mountains but it was thermic to the south, so to the south we went. We had some nice (and  very close) views of Cuculo and Oroel.

Thursday
We woke on Thursday to several inches of snow and we were convinced we could have a day off. But we did nearly 8 hrs flying and Paul was definitely seen to smile, making up  for his missed day on Monday.
Friday
the day was dull and overcast, but that didn’t seem to matter. Anne took a launch with Bob in the back, found a thermal off the home hill at some ridiculously low height, climbed away, flew up to stage 2 looked at it and carried on up to the tops,  looked over into France and came home. Everyone else had rounded off the week with good flights too.

Saturday
The forecast was for rain and it was right. Some of the rain was frozen and we didn’t get the gliders out of the hangar. But no matter, we had an excellent Spanish lunch (three courses, wine and coffee) up at the airfield, it was going to be dinner but the weather was even too bad for sightseeing and spent the rest of the day packing up and relaxing.

And so the week ended. Five days flying out of six, all the flights interesting, even challenging at times which is just the way it should be. If it’s too easy  it’s no fun!